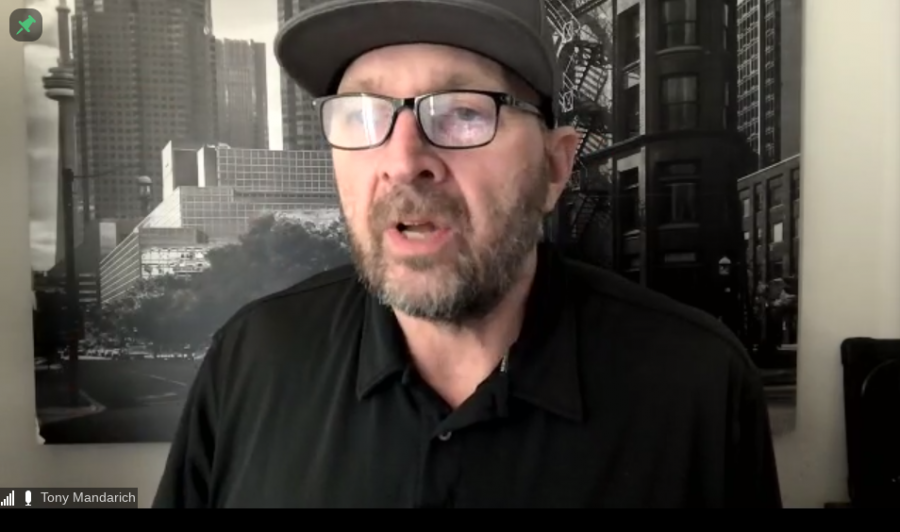 This is a screenshot of Tony Mandarich speaking at the event.

On Thursday, January 14th, the Above the Influence club gathered after school to hear the words of a guest speaker. This was not the guest speaker event of years past: some members sat in spread-out auditorium seating, while others participated from home. The speaker himself was in Arizona at the time of the event, but the club came together on Zoom to hear his words.

The speaker was Tony Mandarich, a former player for the Green Bay Packers and Indianapolis Colts. He shared the story of his addiction and recovery with the club, and then took questions.

Members were able to anonymously ask via private chat about his relationships with his family and his team, his attendance at 12-step meetings, leaving football, and his biggest accomplishment.

“If I’m not sober, literally nothing else matters,” he told them.

His past experiences are why he supports the Above the Influence Club’s mission of protecting our community from addiction.
“What you guys do and represent, I think that’s very important,” he said. “You’re changing lives, and you’re probably changing lives that you don’t see.”
His struggles illuminated to club members the massive impact that addiction can have on people’s lives.

Mandarich was able to recover through time in a treatment center, but that dark period of time inspired him to make significant changes to his life.

“I didn’t like that person I was, so I did something about it,” he said.

He took the opportunity to return to football in order to right the wrongs that he’d done in the past. After leaving football due to a shoulder injury, he followed another passion: helping other people better their lives. This meeting was part of that, as he offered much advice to the club members.

“This is a really crucial thing, is surrounding yourself with the right people,” he said.

He concluded by saying that he enjoyed the opportunity to talk with the club.

“It was a privilege to be able to share,” he said.