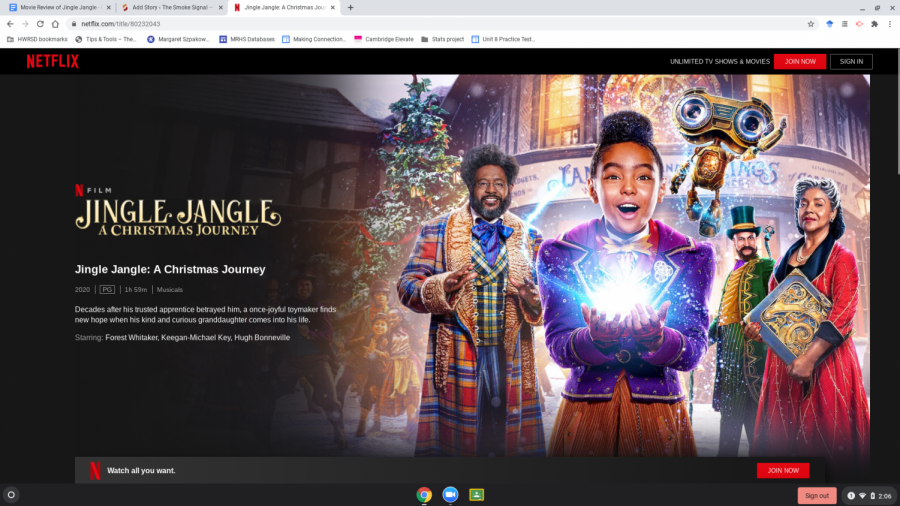 This is a promotional image from the 2020 film Jingle Jangle.

With its fantastic music, lighthearted but compelling plot line, and wonderful actors, Jingle Jangle is the perfect movie to watch with the whole family, young or old, as you let your holiday decorations sparkle around you.  This film tells the story of inventor Jeronicus Jangle who loses his title as top inventor as well as his passion for inventing when his apprentice, Gustafon, betrays him and steals his ideas and starts his own company. All seems lost for Jeronicus until, years later, his granddaughter Journey arrives at his doorstep, her own passion a potential for reigniting his own.

While watching the movie musical Jingle Jangle, not a single member of my family was able to look away from the screen, despite our usually varied movie tastes. This movie has a wonderful blend of action, music, comedy, and more emotional moments. Child star Madalen Mills (who played Journey) and her co-stars, Forest Whitaker (Jeronicus Jangle), Keegan-Michael Key (Gustafson), Anika Noni Rose (Jessica), and Lisa Davina Phillip (Ms. Johnson), did a wonderful job of creating a film that drew me in from the start. With the colorful costumes, delightful demonstration of both men and women inventors, and intricately choreographed musical numbers, there was never a dull moment in this film. I would strongly recommend it to anyone willing to relax for a few hours and be pulled in by some holiday cheer and movie magic.