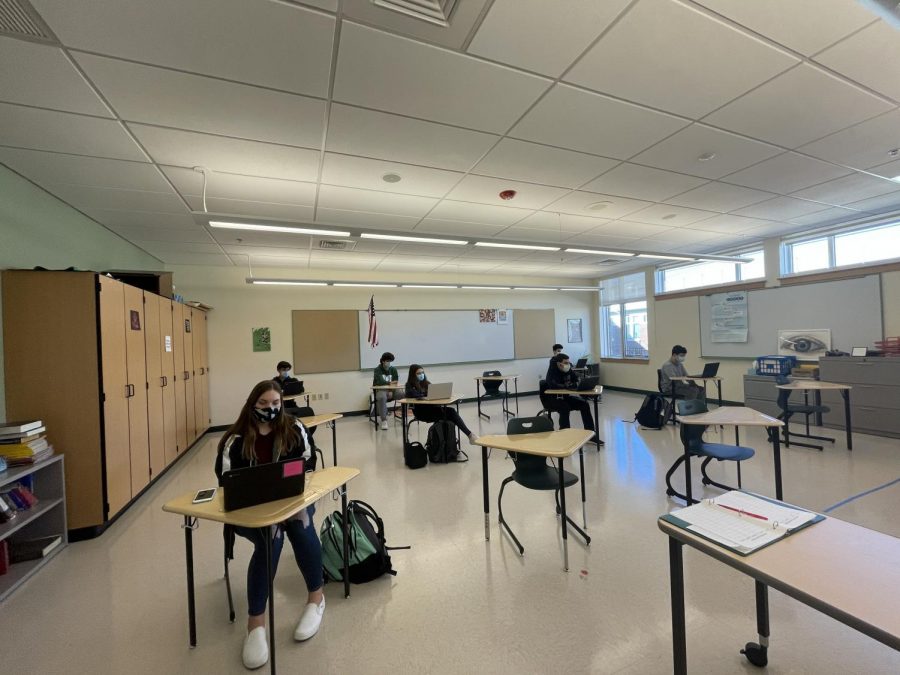 The HWRSD School Committee chose to go hybrid following DESE’s (the Department of Elementary and Secondary Education) protocols; here is what to know about why this was their decision, how reopening and planning went, as well as comments and concerns.

The hybrid learning model is the most difficult and expensive to make work, but with the help of everyone in the district, it was possible. The emergence of the Covid-19 virus during the 2019-2020 school year had everyone affected asking themselves: where do we go from here?

From the beginning, Caruana knew they were going to need help. Superintendent Albert Ganem Jr. had similar thoughts when he sat down with principals and directors in the district on March 13th to tell them,“This is going, coming, quick.”

The hybrid model in HWRSD isn’t what it sounds like. Caruana said that they had a pick of 3 choices: full remote, hybrid, or full in person. They chose them all.

DESE wanted school districts to do this; so that each school would be able to pivot if cases rose or remained steady.

Cohort D is full remote and consists of students who may have a medical issue or their parents need them to be home.

Cohort C, whose students go to school everyday except Wednesdays, is made of students in special education, with special needs, intense resource rooms or have physical therapy, foster care, children of members of the military, as well as English language learners (ELLs).

When asked why two days was chosen over a one week cycle for the hybrid students, Ganem answered that it would have been difficult for families; students need the engagement and structure of being with their teacher face to face.

Wednesdays were chosen transition days, for custodians to clean the school and air everything out (other districts chose Fridays).

With reopening, one issue they faced, according to Caruana, was too many people in remote learning classes. In one class, at the elementary level, there were 127 students because hybrid students at home got put in with full remote students.

Teachers can’t accurately give grades with so many students and attendance/morning meetings take too much time. No longer is there a personal connection between  teacher and student like in the spring when teachers were having 45 minute individual calls.

On top of those issues, there was also a problem with ordering chromebooks due to the high demand for them across the nation, which both Caruana and Ganem discussed. At the beginning of the year, the district was left 900 chromebooks short on the first day of school.

The shipment finally came in a few weeks after school started, now leaving less than 50 students without devices.

According to Caruana, during spring and summer, administration broke down what they needed to plan for and work on into “buckets”; facilities and management, safety, curriculum, technology, and public relations. They had working groups with parents, students, and staff to help problem solve and give feedback.

The district applied for every grant that they could during the pandemic; they didn’t want to miss any opportunities. They got around $600,000 from the Coronavirus Aid, Relief, and Economic Security act (CARES) and $250,000 from the Empowerment Scholarship Account grant (ESA), though all this money came in stages not in one big sum.

They also had to sort the students in hybrid into the different cohorts which posed more trouble than they thought. Ganem said they tried to do it alphabetically, but also had to be mindful of the number of students within each group, as well as keeping siblings together, but still making everything work for class sizes and bus routes.

When schools closed in March, the principles and directors met every Tuesday and Thursday to problem solve and brainstorm. Steve Hale, principal of Minnechaug Regional Highschool, explained all the preparations that had to be made.

For instance, how were they going to fit everyone in while still enforcing the 6 foot distancing?

“That was the lion’s share of the work.”, Hale said.

They spent upwards of 2 weeks to map out the building and figure out how they would fit everyone. In the end, extra furniture was moved into the cafeteria and gym for lunches, and over 500 desks were moved into storage.

This has meant that signing in and out, as well as keeping seating charts all the more important. Especially with the emergence of new cases. At the time of interviewing Caruana, there were 2 cases in the district. Since then cases have only risen, to the point where the district had to go fully remote for one week.

“To use the expression big brother’s watching you, we’re watching every move you make.” Ganem said.

There have also been positive developments. Such as the hope to bring kindergarten and first graders into the building full time, a topic important to both Ganem and Caruana. As well as for the 4th and 5th grade to be moving to synchronized learning, meaning students will see their teacher every day, whether in class or via zoom.

While the HWRSD is striving to become better, they have looked for help wherever they could. Caruana said she mainly looks into other districts’ school committee meetings to see what is working or not working for them. She has seen that problems come when students run out of bandwidth and are not able to access their online classes.

Hale also talks about his meetings with the Pioneer Valley high school principals who communicate weekly. Including how on November 3rd they sent a teacher from each department to zoom with other districts to see what is and isn’t working.

“I think it is always important to give teachers time to talk to other teachers from other environments to see.” Hale said. “More minds on the table is a good thing.”

Trying to work with and help the parents was also an important goal. Caruana talked of getting 10-25 emails a day from parents about their frustrations. Such as concerns over the school not taking temperatures and how she had to explain that taking so many temperatures is time consuming and wouldn’t promote social distancing.

When the CDC came out that there were tons of false positives and negatives, emails on that subject stopped coming in.

“There is no winning, the ‘winning’ comes just by listening and trying to be respectful when you answer their questions and trying to put yourself in their shoes.” Caruana said when asked about parents’ conflicting opinions.

This also relates to the struggles of the teachers and students as well.

“Every single thing that we were used to doing, we now had to look at differently.” Ganem said.

He goes on to explain that many new things everyone had to learn to do can be implemented when the district returns to semi-normal. Caruana also touches on this topic and recommends teachers keep a journal with what practices have worked that they may use in the future.

Many teachers have also retired which brings in a whole new era of teachers who are tech savvy, digital natives that can have an impact on the future of education.

Many things are still getting better. For instance, teachers now have dual monitors and tools like edpuzzle and jamboard. In the future they may even have swivel cameras to make digital learning easier.

While Hale doesn’t think Zoom will stay, he said,  “I think there’s a lot of elements that will.”

In the words of Ms. Goodrow, that Hale pointed out, this year has been “a forced evolution of instruction”.