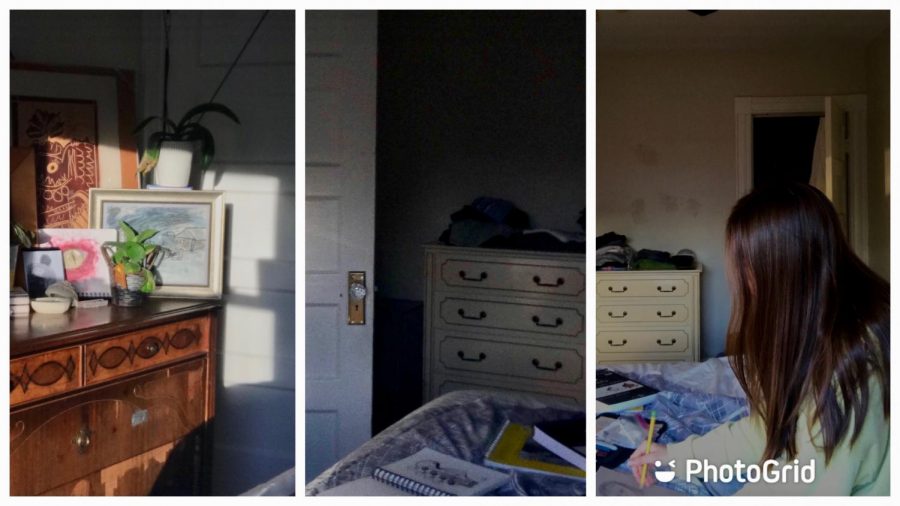 Dakotah Pavoni, a sophomore at Minnechaug, draws in her room

According to The Council, a research group for mental health,  “80% of adolescent girls ‘feel more lonely and isolated than before,’”  due to the extended quarantine that occurred last spring.

Many adults noticed that teen mental health has worsened over the past few months. Guidance Counselor Chenda Raffaele and Adjustment Counselor Darcy Andre both agreed that teens were showing increased signs of depression and anxiety and that students struggled to find the motivation to do school work.

After interviewing Junior (then sophomore) Claire Robinson and Sophomore (then freshman) Dakotah Pavoni, it became clear that adults weren’t the only ones noticing decreased mental health for teens. Pavoni reported feeling “alone in the same house”, that even with her family with her she was still feeling increasingly isolated, lonely, and anxious.

As quarantine began, it became increasingly hard for teens to maintain social connections. While being stuck in their house, the only way to contact friends was over social media. This played a huge role in the decrease of their mental health.

Robinson explained that this was one of the hardest parts for her. “I was out of shape for social interaction. I was out of practice,” she said.

“The worst part about it is not giving or receiving hugs” described Pavoni. She was only able to call her friends, but this wasn’t the same.

Another issue many teens faced was the inability to maintain a structure. Robinson and Pavoni both reported that they struggled to maintain a schedule, which led to them feeling like they could get nothing done.

Mrs. Andre said that many students were able to get more sleep as they were less busy and able to slow down more. They were also able to reconnect with their families as they had to find creative ways to keep busy.

“Students who have had strained relationships with families, the extra time with family members has helped. Families have been able to spend more time together doing more enjoyable things rather than more routine things.” said Mrs. Andre

The overwhelming agreement for an improvement on teen mental health was the ability to take a step back and to do something they enjoy. Whether it be drawing, baking, listening to music, or exercising, taking time for themselves allowed many teens to recenter and take a break.

After all, as Mrs. Raffaele said, “Those who are doing the best are the ones with the most support.”
If you are struggling, there is help in Minnechaug. You can speak with a guidance counselor or adjustment counselor by going to the Guidance Department.