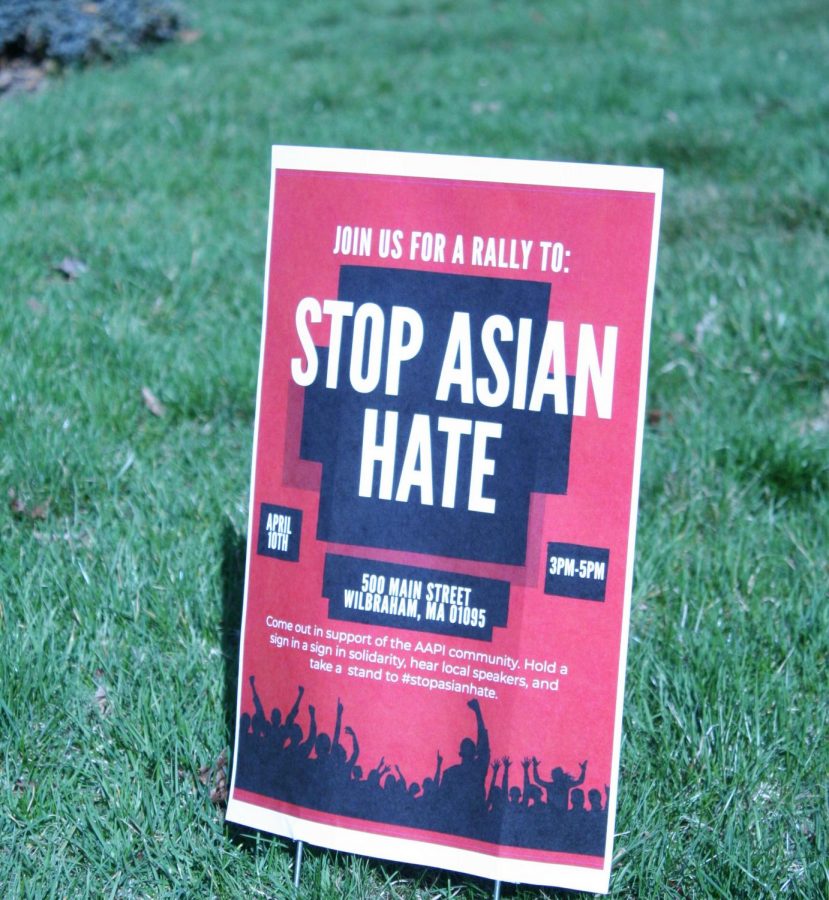 According to an analysis released by the Center of the Study of Hate and Extremism, anti-Asian hate crimes have increased by 150 percent in 2020.

Around fifty people showed up at the event, all showing their solidarity and some even holding signs that read things such as “Dismantle White Supremacy” and “Stop Asian Hate.”

Ten people spoke at the rally, including Ms. Norris and Renee Bracy, a biracial women who co-hosted the event with Ms. Norris. Also speaking were Diversity and Culture Club President Maya Glenn and Pastor Chip Hurd.

During the first half of her speech, Bracy empathized with Asian Americans and Pacific Islanders in the struggle against white supremacy, saying that white supremacy doesn’t care that she’s half white. “White supremacy only cares that I’m not all white,” she said.

Bracey said white supremacy is so focused on hating non-white people that we must all stand together against it.

In order to dismantle this system, we must all collectively work together and stand together, she said.

“We must use our collective voices and say no more,” she said. “No more ignoring. No more to silence.”

When Bracy finished, the audiences’ captivated silence broke into applause.

Diversity and Culture Club President Maya Glenn, a senior at Chaug, said resources for support should have been more clearly offered and easily accessible to Asian students at Minnechaug.

Glenn also said that Minnechaug administrators should hire more AAPI teachers and staff, but unfortunately knows that this cannot just be asked of the administration.

Two Minnechaug freshmen, Olivia Rucki and Ainsley Sheehan, who attended the rally also agreed that Minnechaug and the community should step up and do more.

“I don’t think I’ve seen any POC teacher. The lack of POC teachers at Minnechaug is saddening,” Sheehan said. “It’s important to acknowledge what happened and not brush over it.”

Nicolas Lang, an Asian American and a senior at Minnechaug, came out to the rally to represent the Diversity and Culture Club as the clubs’ secretary, and to support his community.

He mentioned one way that Minnechaug could address the problem of these recent anti-Asian hate crimes through the expansion of the curriculum.

“I think it’s really important for us to have more diverse history classes – it doesn’t even have to be history – for us to talk about people of color and their experiences.” Lang suggested.

Maya Damino, a senior at Minnechaug and a member of the Diversity and Culture Club, proposed that the weekly newsletter and morning announcements would be a good way for the Minnechaug administration to connect to students about issues and hate crimes.

“They also have the morning announcements where they speak to the students every single day and they aren’t really addressing it through that,” Damino said.

Morgan Hastain, a senior and The Smoke Signal News Editor, agreed with what Lang and Damino suggested.

She also mentioned how it was important that white allies attended the Stop Asian Hate Rally – and how it’s beneficial to attend more rallies and events in the future.

“As a white student you don’t really think about these things – but hearing these people speak was extremely eye opening because you have to put yourself in their shoes and really listen to what they have to say because that’s the only way we can make change.” Hastain conveyed.

Pastor Chip Hurd, a speaker at the rally, also shared his ideas on unification between white allies and people of color.

“White people must not leave it up to only people of color to do the work – they’ve been doing the work.” Pastor Hurd began. “We need to open our ears and our eyes and our hearts to the truth that we have rejected. Because we do not want to bear the pain and responsibility we have put on others.”

Hurd also mentioned the danger of white supremacy, and the violence that comes with it, saying that it is everybody’s collective responsibility to stand up against white supremacy.

Kelly Norris, a Minnechaug English teacher and the Diversity and Culture Club advisor, read a speech written by a Chinese American DCC member who wishes to remain anonymous.

During the beginning of the COVID-19 outbreak, many people on social media began wrongfully blaming the virus on AAPI people. The DCC member believed these awful social media posts at first.

“I believed that I was the reason that people were dying and getting sick. I wanted to say sorry to those who believed that it was all the Asian’s fault. I almost did,” she wrote.

As a Chinese American, she felt scared every time she walked by someone in public, afraid that someone would come up to her and call her racist slurs or blame her for the virus.

Lisa Murray, a school committee candidate, said that it was inspiring to see Minnechaug students engaging with the community during an interview at the rally.

“Hearing Chaug students’ experiences was very impactful and they should be proud of themselves. I wanted to show my support to those students and the bravery they displayed while speaking in front of residents.” Murray said.

She also mentioned that Minnechaug’s administration needs to be proactive in creating a culturally responsive environment for students and families.

“There are organizations and consultants that work with school districts to study and improve school culture.” Murray added.

There is still work to be done when it comes to combating racism and dismantling white supremacy, but if we all work together we can fix this system and support the AAPI community. Two handouts were given at the end of the rally by the Diversity and Culture Club and the AAPI Alliance of Western MA, a photo of one is attached above and the second one included links to helpful websites which will be attached below.

AAPI-Supporting Organizations to Stand With and Donate To

The Making of Asian America: A History by Erika Lee

Yellow: Race in America beyond Black and White by Frank H. Wu

The AAPI Alliance of Western MA is dedicated to ending anti-Asian racism and violence, and racism in all its forms. Follow them to learn more about their upcoming events and to stay up-to-date with news impacting our community.